On my travels I often meet kindred spirits. It makes me a little sad that they will only ever remain in my memory.

I arrived at the Amritapuri Ashram, home of Indian Guru, Amma. I was exhausted, a little ill and wanting to retreat. I signed up for the IAM Meditation – Amma’s signature and branded meditation course. On the final day, they served some tea and I got chatting with Laila.

Laila had been sitting right next to me during the three days of the meditation training. I was not in the mood for connecting, so I kept my head down. But I definitely noticed her. She looked a little intimidating. Her hair was streaked with peroxide and shaved on one side. If I remember correctly, she had many piercings and tattoos.

When we finally spoke her demeanour was so open and friendly, not at all how I had imagined from her outward appearance. Laila was from Iran but had been living in India for the past 8 years while studying dentistry. 8 years in India! She had not adopted the head wobble or Indian accent that many foreigners seem to do.

The following day, I was trying to find a pleasant area in the ashram to sit and do some writing outside of my room. I was in the big main hall. Laila walked past and said, ‘I’m going into town, would you like me to get you anything? Any fruits?’

I answered, “perhaps I’ll come with you.” Any excuse to divert my attention away from what I was meant to be doing. And I just couldn’t settle in this dingy hall with constant passers-by.

Before leaving, Laila wanted to pop into Rams Bazaar (the second-hand shop) to buy some shoes. She had been wondering around barefoot but need beckoned as she was going to leave the ashram to buy her sick boyfriend some fruits. We wondered into town. I felt so easy and relaxed with her. She was full of enthusiasm and positivity and it was a joy to be in her company.

Later that day we spent some time hanging out eating delicious cakes from the French bakery. Laila was one of those naturally very slim people who could eat lots and looked good in rags. I liked her style, effortlessly cool and she accessorised well, I especially liked the headscarf she wore. Her face was beautiful, olive skin, full lips and dark brown eyes. We talked about Iran, it sounded so fascinating to me, she was planning on returning despite the restrictive culture. I felt an openness and freedom in her, she had magnetic energy, in her company, I found myself surrounded by new faces that I had not seen before. It felt good to be with her, familiar and warm. I noticed a few funny quips about the Amma obsessives, she was the cool kid in town and I wanted to be her friend. I felt like we would have a lot of fun together.

I thought maybe her stay in the Ashram would be extended due to her boyfriend’s sickness, but it was not. And just like that a kindred spirit entered and left my sphere. I met her boyfriend in passing. I thought they looked like a great match. I hope it worked out for them. She was a real catch. A beautiful woman inside and out.

I met Liza in my final week in the Ashram. Much like Laila she had a tall, slender frame with shortish hair that was very strait and kind of sticking out. Liza told me that her hair was very long until she contracted a terrible lice infestation in Auroville and she had to cut all of her hair off. I was horrified at the thought and this explained the scarecrow hair cut. Liza was from France and although her English was very good, she said that she didn’t enjoy speaking it. We were doing our ‘SEVA’ (act of selfless service) of washing dishes together. I acknowledged her for being such a fast and efficient worker. We provide this SEVA to the Ashram as part of our contribution to running the place, keeping costs down and the community strong.

Liza had a serious demeanor. She was more difficult to supple up and get a laugh out of. There was an intensity about her and I could see she was fully maximising this trip in India for her growth. I was happy she had joined our little team,  she was disciplined and straight talking,  she was the type of good friend you could trust for honest feedback. There was no bullshit where Liza was concerned. As much as I love a laugh and messing around, I am also incredibly prone to an intense chat, so she caught my attention in equal measure to Laila and getting a giggle out of a personality such as this is a satisfying victory for me.

One morning I had to leave SEVA early, but luckily Cynthia turned up just as I was leaving. She happened to be over an hour late. We were meant to always have three people working at the same time. There was a strict system of how to wash the dishes. 4 enormous Tupperware bowls in four separate sinks. The first bowl was for tough grease and dirt. The second was to wash further. The third and fourth for rinsing. We were taught to waste minimum water. Many interesting chats prevailed over those big sinks.

The next morning, Liza grumbled that Cynthia stayed only five minutes before making excuses that her time was needed elsewhere. Liza had worked for an hour alone and today it was just the two of us. Again, we were waiting on Cynthia. Liza remarked, ‘I rather we were just two people with good energy,’ implying Cynthia did not match our energies.

Then Cynthia bounced in again with her excuses. We excused her and said that we would be fine just the two of us. After some time, Liza apologised. She felt bad for commenting and complaining about Cynthia. I reassured her it was all forgotten.

My final days in the Ashram, Liza decided to take a vow of silence. When she said goodbye, it was truly heart felt. It was a surreal moment having Cynthia and Carolina (the manager) witness our goodbye. We hugged and said our goodbye’s with a deep sincerity. I had worked with Cynthia and Carolina for much longer and I had shared more conversations with them, but the connection with Liza ran deeper.

I suspected Liza and I were closer in age, not that I ever inquired. I think we were both on a similar journey. We did not have desires to devote our life to Amma and live in the Ashram. We were observers, but we were willing to work hard and contribute to the running of this well-oiled machine of Ashram life.

Liza was a cool girl. She was going to have a kick ass life and won’t take any shit from anyone. I liked that about her. When she was pissed with Cynthia she said, “you make a commitment to something and you keep to it. The other situation can wait.” And I agreed. This is the kind of integrity I appreciate.

The reason I write about Laila and Liza is because I never got a photo with them and we never exchanged contact details. I thought about it, but for whatever reason, it wasn’t meant to be like that. I had to tell myself to drop the attachment and wanting to ask if they had Facebook so I could keep track on their travels.

I was meant to remember them in my mind and in my heart. 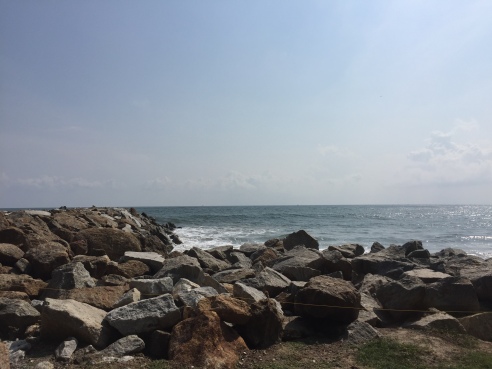 Laila and Liza: if you ever read this I would love to hear how you are. I send you my love. I know wherever you are in the world you are shining brightly.

I made a note of some of the conversations topics I shared in the Ashram….

Asking a psychologist what she thought of astrology.

There’s a guy in here doing prana. He claims he hasn’t eaten in months and gets all energy from the sun.

I feel really good around you.

Have you noticed there are not many ‘analytical’ people in this place.

Amma has an agreement with the snakes so that they don’t bite anyone here.

Why do people not smile here?

I have so many different looks, does that mean I have a split identity?

I wish there was a mani/pedi bar here.

The world is a shit place, why would I bother having a child?

Have you heard there is a psychopath living in here?