A year ago today I gave up smoking. Finally.

I was one of those vehementally anti smoker kids, mainly because I felt that smoking attributed to the untimely death of my Father when he was 42 years old and I was 9.

So I started smoking 9 years later at the age of 18, and eventually quit 18 years later.

I didn’t want to shout about it last year. Because I had never managed to quit for longer than 9 months before now.

Curious, all these multiples of 9.

I started to seriously smoke in Kenya in 1999. I remember it clearly, picking up a Marlboro Menthol, thinking, I’m going to light a cigarette on my own. I’d taken casual puffs on other people’s cigarettes and joints, but never smoked one from start to finish.

I remember thinking it didn’t taste too bad, I must have been bored, feeling like I wanted to do something rebellious and perhaps the monkey in me wanted to emulate what everyone else was doing in a foreign environment.

By the time I got to Italy later that year, my friend Georgie and I were chuffing away in our hotel beds, and I was completely and utterly hooked. 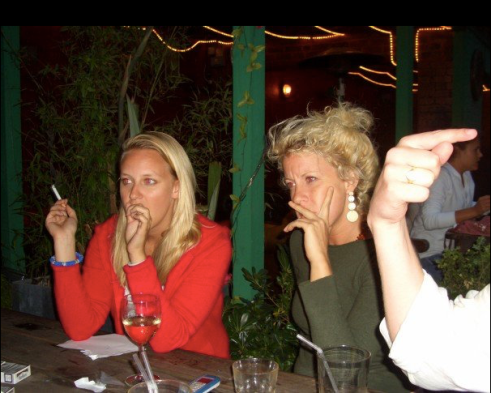 I think I took my first foray into reading Alan Car’s The Only Way to Stop Smoking around the age of 21 (another multiple of 9) six months after my Mum passed away.

Most of my adult years have been peppered with smoking and non- smoking times that I can recall clearly. The times I picked up a cigarette thinking I was safe to socially smoke after a sabbatical, quickly desended into a coffee and cigarette first thing in the morning habit.

Until I would get so sick of being a slave to the addiction that I would turn once again to Alan Car’s book or it would be another New Year, new me.

For me, there is nothing more satisfying than meeting old girlfriends, sitting down with a bottle of wine and opening a fresh pack of Camel Lights and binging through the packet and putting the worlds to rights.

For me, I pick up smoking, because its connection. I want to be outside with the cool kids smoking a cigarette and talking. Annoyingly I could never restrict myself just to social smoking and what starts as a desire to connect, quickly becomes an isolated fix. I would reward myself with a cigarette as a break when I’m studying, or stop and have one before leaving the house, or when I’m alone in the car, or wanting to go to bars which allow smoking and sneakily I’ve become a slave again to the cigs.

I fell into the trap again last year. I hit my 36th Birthday in February in Mumbai and told myself I was quitting after 18 years. As soon as I hit Goa, I found myself in new company and wanting to connect with a fag in hand. Then I finished my yoga teacher training and decided that was it for smoking.

Until I arrived in Kolkata at a colonial hotel which had ashtrays in the sitting room. It felt like a travesty not to enjoy the palatial environment without a fag in my hand.

On April 20th I was sitting in a roof top bar in Kolkata with an old school friend, Joydeep. It was hot and humid. I hadn’t smoked for a week, I looked longingly at his pack, it was an unknown brand to me. I asked if I could take one.

I sat there sucking deeply, thinking to myself it wasn’t the best taste, but the greedy little addiction finished the whole thing despite the super strength.

And then the world started to close in.

I looked at Joydeep and said I didn’t feel at all well.

The next thing I know I had a bunch of faces looking down on me and people shoving sugar in my mouth. I had fainted in the bar!!

It was such a nasty shock, I was sweating profusely and shaken up.

I felt it was a message from my Father.

This was the anniversary of his death 20th April 1990, 27 years after his death. Another multiple of 9.

And 9 is an ending number.

I took the message, I thanked him and from that day forward I haven’t picked up a cigarette since then.

One Response to “Quitting the Cigs!”